One apple today, two apples tomorrow, OR: How I stopped being afraid, and learned to love Deflation

On the Bitcoin Forums, not a day goes by that somebody doesn't post an 'Oh noes!' type thread that goes something like this:

"Hey, I've just learned about this whole Bitcoin thing, and it looks really, really awesome, but I think I see a problem that the creators and all of you seem to have missed: With a fixed, limited supply, won't we eventually run out of Bitcoins? And worse, what if they get deleted? I mean, they're just data! Economic ruin and collapse! "

I admit, I'm guilty myself, and I extend my heartfelt thanks to the posters who gently guided me to the right conclusion. To save them and myself the trouble of filling yet another thread with the same info, I'm going to put those arguments into a nice, succinct little package, which, I hope, will be linked to frequently.

Market supply: Amount of 'stuff' (goods or services) that you could buy if you had all the money, ie, everything that's for sale.

Money supply: The total amount of money in the market, including physical currency and spreadsheet dollars.

Purchasing power: The fraction of the market supply a single unit of currency can buy.

Inflation: Devaluation of a currency by adding to the money supply, or decreased demand for the currency.

Deflation: Increased valuation of a currency resulting from a decrease in the money supply, or increased demand for the currency.

Now, I'll explain the relative dangers of Deflation vs. Inflation. Inflation damages the economy by reducing the purchasing power of your money. In extreme cases, this occurs so fast that you lose value by the time you have taken the check to the bank. This has the effect of discouraging savings and directly damage those who take the inflated currency at its previous value. These individuals are usually those people working hourly jobs because wages do not keep perfect time with inflation and often lag considerably.

Deflation, on the other hand, can damage the economy by placing an incentive to save, rather than spend. Over-saving can be just as damaging as over-spending. But unlike saving, you have to spend some eventually, so there's a built-in incentive to spend: continued survival. A deflationary economy can also stifle entrepreneurship because it increases the risk of loss without significantly increasing the return on the investment over that of simply letting the money sit and gain value.

Here, I should also point out that there are actually three different means of deflation: The first is Deflationary Growth, which is what the Bitcoin market is experiencing now, and what causes the worried posts. The second is Debt Deflation, which is where a central bank takes currency out of the Market. This is what worries most people, and with good reason, as a central bank is just as capable of killing a market in this way as it is by inflation. In fact, it is with deflation that the central bank 'pulls the trigger' on an inflationary bubble. The reduction in money supply causes a reduction in lending, which in turn causes a reduction in demand, and a resultant drop in prices. This drop in prices causes a further reduction in lending, and the cycle starts anew. (This is why credit based economies are bad, by the way, they're locked into this inflate or die model.) The third is destruction or loss (or in the case of precious metals, use) of the currency. This is what will eventually end Bitcoin's usefulness as a currency, but compared to the other two, it is a very weak force.

Comparatively, I'd rather live with a deflationary economy, rather than an inflationary one, for the simple fact that I like to have some money in my pocket. Inflation discourages that. A deflationary economy also has that built-in check on the incentivized behavior. This check is called time preference, and can be best summed up in the expression "You can't take it with you". In general, people want to have stuff sooner, rather than later, and ultimately, you can't spend money if you're dead, so an individual will only wait so long before making a purchase. Deflation also heightens the market tendency to drive out inefficiency. A company has to have a very strong bottom line to survive.

So, those are the dangers, now let's look at the realities. To see the realities of Inflation, you need only look around. Not a single country in the world currently uses a non-inflationary currency, and the wreckage that has left the world economy is clear to see. No country uses a deflationary currency either - at least, not currently, the Dollar was heavily deflationary during the Great Depression, which arguably resulted in a worse situation than Inflation would have. In the long term, Bitcoin will be a deflationary currency, in the same sense that gold is inflationary; a few bitcoins will be lost every year or so due to data corruption and accidental deletion, just as a little gold is found each year. In the short term, Bitcoin is sharply inflationary, but demand is rising even faster, causing the increased valuation that has everyone running and screaming 'Bubble!'

As a currency in it's infancy, Bitcoin is still growing. It's growing so fast its stretchmarks have stretchmarks. It's this exact meteoric growth which is precipitating the 'oh noes' type postings. People see the growth curve on Mt. Gox or elsewhere, and instinctively know that growth like that can't be sustained forever. They're right, of course, but they're worried needlessly. What they're looking at is a growth spurt, much like a teenager spurting up overnight. Just like a teenager doesn't keep growing until they won't fit inside the house, the Bitcoin will eventually stabilize in value.

In comparison, Gold is a fairly stable currency, and has been respected as such for centuries, if not longer. But yet, it is an inflationary currency! More is found every day, and during the gold rush, a huge inflation occurred. The key is volume. The current economic ruin is caused by a continuing, excessive inflation. The market can adjust to a limited amount of either deflation or inflation over a period of time. Given the fact that destroyed bitcoins are functionally identical to saved coins, (in other words, the market doesn't know if a coin is gone forever, or just sitting in somebody's account) the value of a bitcoin, once it stabilizes, will remain at least as stable as Gold.

Let me, if you will, make a few predictions regarding the nature of Bitcoin. If you've gotten this far, you've surely seen the curve that governs the production of bitcoins: a sharp rise in the money supply, followed by a gradual approach to zero increase. There will never be more than 21 million BTC total in circulation. Once we stop making more BTC, and everyone starts just shifting them around, there will be continued deflation, averaging out over time into a reverse of the same curve, a gradual decrease in the money supply to some tipping point when everyone jumps ship to Bitcoin 2.0 or some other option. That tipping point will likely happen at the point where the smallest unit of BTC (0.00000001) has greater purchasing power than the current US nickle, or possibly even dime. This problem, and what a wonderful problem it would be to have, is very far off. Not heat-death of the universe far, but far enough that I'm not worried about seeing it in my lifetime. And my as-yet-unborn children won't likely have to worry about it, either.

The first hand of online poker started on January 1, 1998. The software was primitive and the games were limited (only a single stake of a single game w... 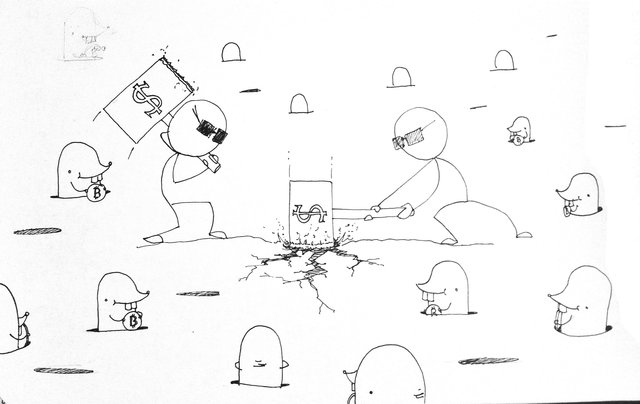 Bitcoin, What's It For?

Specialization, that is the division of labour where each worker focuses on one thing, and doing that one thing really really well. Historically it has always resulted in greater efficieny with mos...