On March 15, 2011 Ron Paul has introduced - or rather, re-introduced the Free Competition in Currency Act, which intends to repeal legal tender laws and prohibit taxation on the exchange of gold, silver and several other precious metals. Ron Paul has brought up this bill before but so far it has been pushed back until it got discarded, as all undebated bills are, when the time for the next election comes. However, the recent surge in popularity of the idea of gold and silver currency ensures that it is far more likely to pass this time than previously. Let us consider what this means for Bitcoin.

The advantages listed by Ron Paul are almost all shared by bitcoin: bitcoins never wear out by virtue of being digital, a fact which also makes them more portable than any other currency out there. Bitcoins can be divided into 100-millionths, so a world economy running entirely on bitcoin, with the corresponding deflation, would still allow transactions in the neighborhood of what is now valued at one US cent. They are recognizable and uniform, and their scarcity is mathematically guaranteed, although, unlike gold, they do not have a 6000-year track record of maintaining their value. Thus the fact that precious metals were mentioned by Ron Paul and Bitcoin was not highlights the main difficulty that Bitcoin faces: the lack of public knowledge about it.

The spirit of the Free Competition in Currency Act is for currencies to compete according to the aforementioned characteristics - durability, divisibility, convenience, uniformity and scarcity. The first section of the bill, the repeal of legal tender laws, would allow all currencies to operate on an equal footing, without the US dollar being propped up by law, causing a boom in the use of alternative currencies in general. As Ron Paul argued, "if people are free to reject debased currency, and instead demand sound money, sound money will gradually return to use in society."

The rationale behind the second section is simple: buying and selling precious metals now is potentially covered by taxes that are intended to apply to non-currency goods, such as sales taxes and capital gains taxes. However, application of these taxes to currency is clearly unreasonable - currency is the exact opposite of a consumer good since by definition currency is intended to never be consumed, and converting from one currency to another is an act intended to facilitate trade, not make a profit. Theoretically, the very idea of taxing capital gains may become very problematic soon: it by definition requires a currency to measure against, so if the US dollar starts hyperinflating and individuals buy alternative currencies like precious metals and Bitcoin to save their fortunes, they may see the $1400 USD they converted into alternative currencies become worth $7000 USD, a "profit" of 400%, and get 35% of this illusory profit taken away from them, while in fact, in terms of the amount of goods their money can buy, they actually made nothing but rather averted a loss of 80%.

The second section, unlike the first, excludes Bitcoin and focuses exclusively on precious metals as currency. However, the bill as a whole will still benefit Bitcoin, not only directly, by removing the status of USD as a legally enforced fiat currency, but also by legitimizing it: with the spirit of Free Competition in Currency, hopefully more people will realize that Bitcoin is a legitimate currency if it is seen to compete and succeed in a free market.

In many otherwise ironclad security systems, the human element is the weakest link. Even with 4096-bit encryption, the latest hashing algorithms and a 5-kB operating system written by hand for the ... 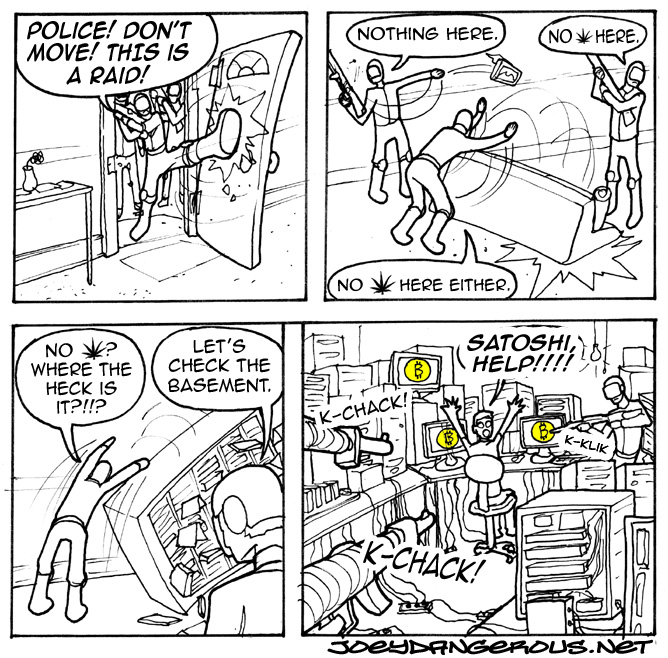 YouTipIt.org creates an easy way for users to support content creators with bitcoin. You can buy bitcoins using Paypal on their site, in addition to being able to deposit bi...